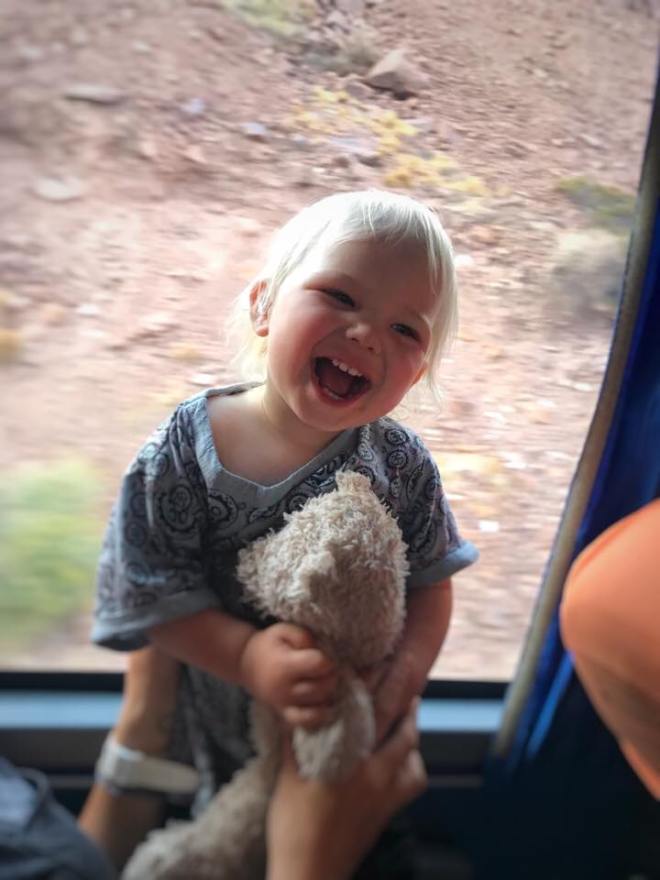 It was time to say goodbye to Chile.  And to be honest we were ready.  The red wine, red meat and sexy tango of Argentina were calling our names.

We had not planned to go to Mendoza originally.  But wine country in Chile is known for white wines and we found ourselves drawn to the Argentinian Melbacs whenever we were out. So the lovely Dutchman whom we met in Peru (and whose potatoes were stolen by Otto) convinced us we should go to Mendoza, by bus. This is one of the reasons we like to keep our plans flexible.

Kevin really wanted to drive over the Andes but an 8 hour bus ride with a toddler seemed daunting.  I tell you, the ONE pro tip that Kevin and I pat ourselves on the back still to this day is we have never ever let Otto down on an airplane, train or bus.  The airport is a free for all but he doesn’t even try on these modes of transportation.

We wanted to leave on the early morning bus but of course waited too long to book our tickets and it was sold out.  So we opted for the 1:30, that actually left at 2.  We then had to wait for an accident to clear still inside Santiago so we probably did not really get moving until about 3.

The bus was nice enough, no entertainment obviously.  And the seats went back almost so much that Kevin basically had the dude in front of him laying on his lap.  They gave us a very sugary juice drink and a bag of cookies.  Unfortunately, but fortunately for Otto, the people across from us also gave Otto one of their cookies as well. 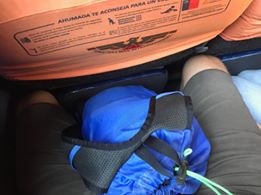 The bus stops at customs pretty much right in the middle of your 8 hour ride.  Customs is unpredictable and could increase or decrease your journey by a few hours.  Lucky for us it was only about a 45 minute detour.  You get out with the others on the bus, get your passport stamped while the driver puts everyones luggage through the X-ray machine.

So I made a very poor mistake.  I read a blog that is obviously outdated that told me that the customs area had food options.  I pictured it like a rest stop on the Jersey turnpike and expected to see a Roy Rogers or some other burger joint.  Because of this I made the second poor mistake of not packing Otto an alternative dinner.  The customs area did not even have a vending machine.  So my poor little baby basically ate sugary cookies for dinner.

The trip itself was really uneventful.  Otto slept about 1.5 hours on each leg of the journey.  He was awake for a surprising amount of time but happy and social.  The views from the windows of the Alps were breathtaking.  You just climb and climb and keep imagining what it would look like all covered in snow! Our bus pulled into the station in Mendoza around 10pm.

Now we just had to get ourselves a taxi and head to the Airbnb, only about 2 miles away off of the square.  Easy peasy.  Except we needed Argentinian pesos as we only had Chilean money.  The ATM in the train station was out of money- which is actually a common thing in Argentina we found out.  So no taxi would agree to take us.  So at 10pm we walked the two miles, with Otto in his stroller and our stuff on our backs.

We also tried two more ATMs on the way.  None of them worked.  We now thought it was our bank card.  But nope, really ATMS seriously run out of money.  Apparently this was a long weekend which makes it even more likely.

Mendoza is such a cool little wine town.  A big square, with four squares off the main one.  We passed a bunch of awesome restaurants and our hungry stomachs just felt worse.  But soon enough we were at the Airbnb.  We threw our stuff down on our comfy bed and the host suggested a restaurant just next door where Kevin could pick up some food for take away.

He came back with the best steak and French fries we’ve ever had (or at least it felt like that) for 12 dollars.  Our cards did work! Otto chowed down and we had a plan in our heads of all the awesome places and wineries we wanted to visit tomorrow that we passed on our long journey to Mendoza.

This is a text widget, which allows you to add text or HTML to your sidebar. You can use them to display text, links, images, HTML, or a combination of these. Edit them in the Widget section of the Customizer.
Loading Comments...
Comment
×
%d bloggers like this: